The $1.2 trillion Infrastructure Investment and Jobs Act (IIJA) is a balanced program that will bring improvements to highways, and bus and rail transit. In all, nearly half of the bill, or $567 billion, will go toward transportation programs.

While many details of the bill’s funding for transportation improvements and transit enhancements in Orange County are still being determined, there’s no doubt that the new bill will have a major positive impact throughout the region for years to come.

The infrastructure bill provides reliable transportation funding for the next five years, including $115.8 billion in new spending for highways, $42.1 billion for transit and $86.7 billion for rail programs.

The bill also provides funding for new programs to battle the effects of climate change and $7.5 billion to speed up the conversion to electric vehicles, leading to cleaner air for all. 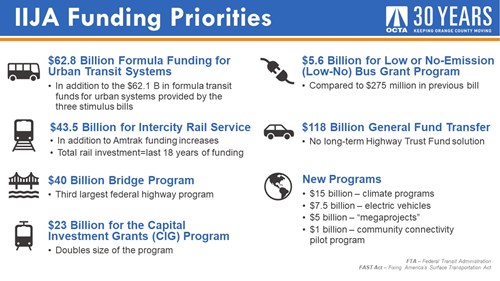