“OCTA is a leader in testing zero-emission bus technology, and it was an honor to share our efforts with CalSTA Secretary Kim,” Johnson said. “Our hydrogen fuel cell electric bus program is just one component of OCTA’s efforts to develop a balanced and sustainable transportation system that will help bring even cleaner air quality to Orange County.”

The buses are fueled at OCTA’s Santa Ana bus base. OCTA’s hydrogen fueling station is the largest in the nation for public transportation.

“Hydrogen fuel-cell buses are a key strategy to rapidly reduce dependence on fossil fuels and realize an electrified future for the transportation sector, and California is leading the way,” Secretary Kim said. “Under Governor Gavin Newsom, the state is making historic investments in zero-emission transportation, and Orange County can serve as a model for that transition.”

In addition to its hydrogen fuel cell electric bus pilot program, OCTA will also be testing ten plug-in battery electric buses in the coming months. These buses will operate out of OCTA’s Garden Grove bus base.

Testing both types of zero-emission buses will help determine which technology – or mix of technologies – will work best for Orange County moving forward. 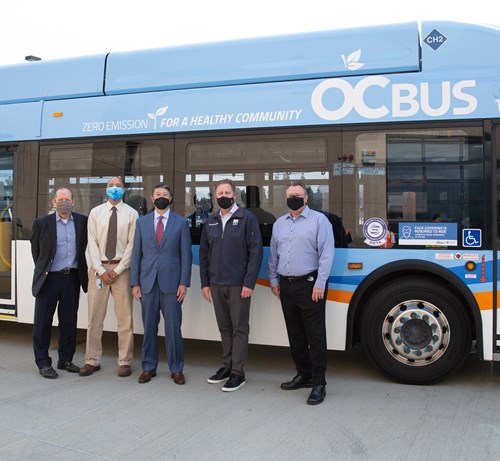 Relax and Recharge with a Virtual Hike
Enjoy a virtual hike through the Trabuco Rose Preserve, one of the permanently protected areas purchased and preserved by OCTA as open space.
OCTA Continues to Make Progress with Active Transportation
OCTA moves forward with projects that encourage human-powered transportation that promote physical activity.
Traffic Signal Coordination Reduces Emissions & Fuel Consumption
An innovative OCTA program helps the environment while coordinating signals throughout the county to improve the flow of traffic.